Nora Juhasz - Me and I - by Hans Fellner

Fellner Louvigny bookshop is exhibiting in its gallery current oil paintings by the Hungarian artist Nora Juhasz, who has been living in Luxembourg for several years.

The main theme of the selection is a research into being alone, ranging from inward meditation, to forms of lack of communication, to outright isolation. At moments the figures seem to reach out, or interact apprehensively.

The situations which Nora Juhasz narrates in her paintings are predominantly placed in public space; simultaneously the scenes take a private and intimate character due to the protagonists’ reticence.

The pictures display individuals or groups of people, each individual occupied with his/her own self, where commonalities seem to become exhausted by the sheer use of shared space.

Attempts to communicate are rarely visible, and if they do happen it is through an intermediary medium, such as a dog or an encounter during a gallery visit. Nevertheless, the depicted persons rarely appear unfriendly or unpleasant, Nora Juhasz positions them almost gently into a section of the ‘Comédie humaine’ of her work. The  use of a pleasant colour palette lets the works appear friendly, but they exude a subtle, irritating silence and speechlessness, triggering the viewers’ desire to allow an further communication.

Nora Juhasz sees her own works as existential, a portrayal of existence in self-chosen or inescapable isolation. It all links to the difficulty of making connections, even if it is only temporarily.

The formal language she has chosen may seem paradoxical, but in its context it establishes an alternative and an optimistic view of the ‘Comédie humaine’.

Nora Juhasz applies oil paint masterfully, in thin glazes and with a safe hand, her paintings seduce with an appealing and surprising palette of colours. The oil paintings have a  graphic appeal, silkscreen-like, almost like pop-art, they are rarely composed in a central perspective, at moments they may seem almost naively designed, as if pieced together from cut outs. The artist takes the liberty to leave pencil sketches visible in her paintings, also using them to suggest transparent objects. The final version is rather sparingly designed and the few internal modelings subtly serve to emphasize certain characterizations of the protagonists.

Nora Juhasz chose predominantly Japanese characters for this cycle of works, due to the culturally justified discretion and the observed closeness and restraint of the Japanese in public space. This enables her to provide her figures with a fundamental and natural dignity. 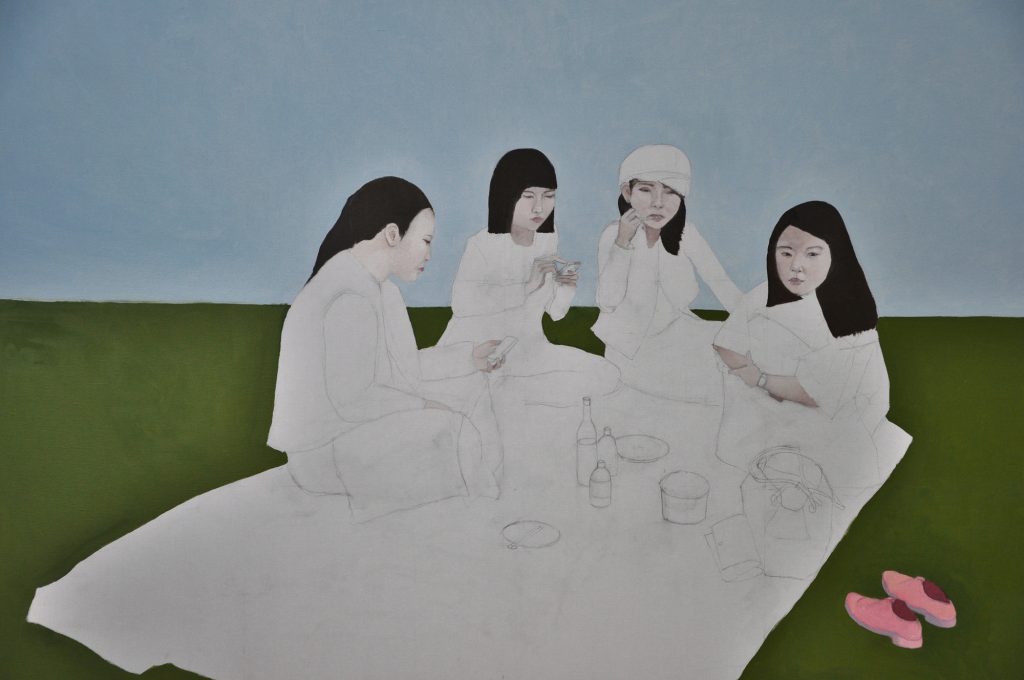